INTRODUCTION. The first of the KOSB in WW1 tours was to GALLIPOLI in May 2015, when a 35 strong, 3 generation, party visited the battlefield in Turkey.

LOOS 100 was marked by an on site visit in September 2015, followed by a large KOSB contingent (the biggest Regimental one by far) marching in the National Commemorations at Dundee, where several members met the Duke and Duchess of Rothesay. Two paving stone events for Piper D Laidlaw VC were also supported by strong KOSB attendance.

Following an all night SOMME 100 vigil in Edinburgh Castle on 30 June/ 1 July by Association stalwarts, the second big tour was to THE SOMME itself in Sep 2016, where over 3000 Borderers lost their lives, in 4 different Battalions. Another 3 generation party visited the battlefields, and crossed a 3 Sep 1916 start line, 100 years to the minute after a disastrous 2 KOSB attack on Faffemont Farm , near Combles, in which 200 + Jocks were killed in an hour. What a memorable walk that was- up to the wood on a low lying, bare hillock, with “Blue Bonnets” playing, and direct descendants of  2 KOSB Cpl Richard Howard, KIA on that spot,  in our party.

Very well organised and attended paving stone ceremonies were held for the 2 x August 1917 VCs- Skinner and Grimbaldeston -in Glasgow and Blackburn. PASSCHENDAELE 100 was marked by a 28 strong party visiting the area, in August 2017, and the unveiling of a new Memorial to all 7053 Borderers who died in WW1, in all theatres, near Zonnebeke, Ypres.

PROPOSITION FOR 2018. With our President’s blessing, we propose that the KOSB Association MUST do one more, our fourth, WW1 100 tour for 1918, and commemorate Sgt McGuffie’s VC winning action on site .We must also attend his paving stone event in Wigtown, in big numbers,  confirmed as the morning of  Friday 28 Sep 2018 . HHQ will co-ordinate Association attendance at that one, together with the Wigtown authorities, who are impressively well organised already for a superb commemoration of their own “Local Hero”.

It is proposed that Andy Middlemiss, Gerry O’Neill, Peter Walton at HHQ, and Ian Gibbs in the South, will between them co-organise a group visit to the Western Front area in the 100th anniversary year- 2018. John Ross has a big anniversary to celebrate, and sadly can’t come this time, but we all pay tribute to him, and thank him for his remarkable contribution, and immaculate admin on the last 3 trips. He will still advise and assist on some of the pre tour admin, and we are really grateful to Gerry O’Neill for kindly stepping in, and offering to help us run this year’s tour.

We plan to visit the sites of our 4 VCs of WW1 – many of the Association have not “done” Piper Laidlaw at LOOS on site, and we ran out of time in 2017 to cover properly the sites of our 2 summer 1917 VCs- Skinner and Grimbaldeston. We also have Sgt McGuffie VC, Sep 1918, to do. We would aim, if we can fit it all in , to cover the KOSB part in the big German spring offensive- the Kaiserschlacht -and the 100 days Campaign –the Allied riposte –which led up to the 11 Nov 1918 Armistice .

This letter is early warning of that trip and to gauge interest in this proposal. 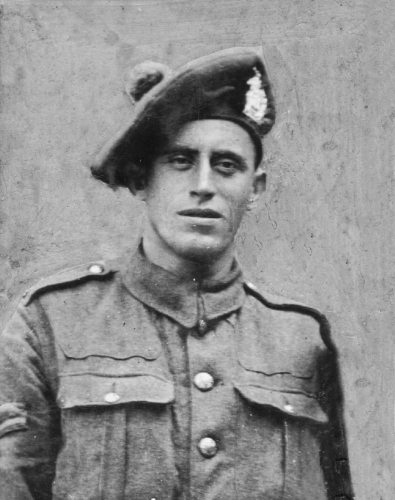 SERGEANT LOUIS McGUFFIE VC KOSB
No. 240693 Cpl. (A./Sjt.) Louis MoGuffie, late l/5th Bn., K.O.S.B. (T.F.) (Wigtown). For most conspicuous bravery and resourceful leadership under heavy fire near Wytschaete on ’28th September, 1918. During the advance to Piccadilly Farm, he, single-handed, entered several enemy dugouts and took many prisoners, and during subsequent operations dealt similarly with dugout after dugout, forcing one officer and twenty-five other ranks to surrender. During the consolidation of the first objective he pursued and brought back several of the enemy who were slipping away, and he was also instrumental in rescuing some ‘ British soldiers who were being led off as prisoners. Later in the day, when in command of a’ platoon, he led it with the utmost dash and resource, capturing many prisoners. This very gallant soldier was subsequently killed by a shell.

HOW AND WHEN– The visit will most likely be travel out on Monday 17- return on Friday 21 Sep 2018- inclusive dates – ie 4 bed nights away.   The party will RV in Ypres again- making their own North and South collective plans – a formula- aside from the Brussels Airlines debacle- which worked well in 2017.We will choose a good hotel in Ypres, on a B & B basis.

The same excellent guide, who took the Gallipoli, Somme and Passchendaele trips, has kindly cleared his diary -the superb Keith Dolan- a story teller and historian par excellence, who brings a battlefield alive with his words and descriptive telling, and who has become a real friend of, and to, the KOSB. He will be tasked to conduct a tour of the main sites, plus walk the ground, where our 4 Battalions specifically fought their actions. A formal act of remembrance at the KOSB panel in Tyne Cot Cemetery, the Scottish Memorial at Zonnebeke, and a wreath laying party at the Menin Gate will be included, as will a Ceilidh at the Captain Cook Restaurant in Ypres, and, if possible, a visit to any specifically requested KOSB family graves/ names on a memorial – time and access allowing.

WHO? The intention would be for a good spread of the Association up to a limit of around 25.  CO 1 SCOTS – Lt Col Andy Watson- has indicated he would very much like to support this, and, if he can, send a party of serving Jocks – up to 5 of a good rank spread – operational commitments and MOD funding allowing.  If we are heavily overbid, a ballot for places will be conducted independently by HHQ, but also allocating proportionately to Branches / Clubs, to give a good geographical spread. We would be happy to run a reserve list.

COSTS. Estimates so far would indicate a £450 rough cost per head, excluding travel out and back. TBC.

TRAVEL. We are looking at options- but are leaning towards a RV on site in Belgium, (ie make your own plans to get there) and hire a local coach daily, as we did in 2017. (The Scotland based contingent last year flew from Edinburgh to Brussels and mini bussed it to Ypres) We will work out options and come back to those who show an interest.

WHAT DO I DO NEXT ? If you would be interested in joining such a venture at this stage, then please let any of the following know:

Please also highlight any special reasons for being included- ie a relative in the battle, and do this before Monday 12 FEB 2018, when bids will close.

Please note that some of the tour will involve walking on uneven, rough ground, so those with poor/ reduced mobility may find this tour too much.
To book, we are going to have to commit to hotels etc early, as 2018, throughout the year, is already filling fast. Then, once the numbers are more certain, and names decided, a committal of a deposit will be taken, in spring 2018.
Your early expression of interest is only that at this stage, not a seat on the bus yet. We will announce in mid Feb 2018, what the response was, and who the party will consist of, with a reserve list if necessary. Feel free to pass this to any friends you think might like to go.

An outline of 1918 to whet your appetite is at Annex A.  Anyone wanting to hear amazing testimonies from the Kaiserschlacht Spring Offensive, listen to:

After transferring many Divisions from the now-collapsed Eastern Front, the German Army commits to a series of large-scale offensives –the Kaiserschlacht. The first, Operation Michael, strikes the British Fifth and Third Armies. A deep advance is made, and inflicts large losses, although the second phase, Operation Mars, at Arras on 28 March, is soon held. In the crisis, the Allies decide at Doullens to appoint French General Foch as co-ordinator and Generalissimo. Before enough French and British reserves are finally assembled to hold the German advance, it captures the critical railway junctions at Amiens.

British in state of flux

At the same time as German strength was growing, the British Army was depleted, having to face up to a manpower crisis and resultant reorganisation, and at a low point of morale, after enduring the conditions of Passchendaele, and the disappointment after early success at Cambrai. They were also coming to terms with the need to fight a defensive battle for the first time since 1915, and the adoption of a deep defensive zone, rather than a continuous trench line system.

The third German offensive, Operation Georgette, takes place in Flanders, with the objective of capturing key railway and supply roads, and cutting off British Second Army at Ypres. After initial successes the German attack is once again held, after British and French reserves are somehow found and deployed.

A small and tired British force, sent to the Chemin des Dames in exchange for fresh French divisions that went North, was struck and virtually destroyed as part of another German offensive, Operation Bluecher.

The British Fourth Army attacks, alongside French forces, further South,  scoring a notable victory, and a deep advance from Amiens. Ludendorff calls 8 August “A black day for the German Army”.

British Third and Fourth Armies commence offensive operations on the same ground over which the 1916 Battle of the Somme was fought. They make deep advances.

Second and Fifth Armies begin operations in the Lys valley, recapturing the ground lost in April 1918.

First and Third Armies attack successfully from Arras, and break the German Drocourt-Queant Line.
Phase: the Battle of the Scarpe, 26 – 30 August 1918 –Much of Third Army’s progress was across the old Somme battlefield of 1916.

The Battles of the Hindenburg Line- 12 September – 12 October

A series of large scale offensive operations that advance to, and break the Hindenburg Line system. Carried out by the First, Third and Fourth Armies these victories rank among the greatest-ever British military achievements. The German Army fights on, but it is increasingly clear that their ability to do so is declining fast. Canadian, Australian, New Zealand and United States Divisions all play key parts.
An officer in the 5th Battalion, Kings Own Scottish Borderers described the action:
It was on 28 September, during the Wytschaete attack. The chief strong point in the Boche line was Piccadilly Farm, a fortified house held by a number of machine-guns. Time and again McGuffie rushed the machine-guns by himself, and knocked out or captured their crews. Then, later, it was found that a party of twenty fellows from another battalion had been cut off and surrounded by twice as many Germans. McGuffie took a couple of men with him, made a surprise rush on them, and surrounded and captured all the Boche.

First and Fifth Armies continue the advance in the Artois region, liberating the French coalfields, Lens and Douai.

The hardest-fought of the final offensive actions. First, Third and Fourth Armies exploited their success in breaking the Hindenburg Line by pushing on across the Rivers Selle and Sambre, recapturing Valenciennes and finally in liberating Mons – where it had all begun for the British Expeditionary Force more than four years before.