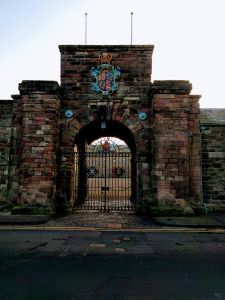 THE KING’S OWN SCOTTISH BORDERERS ASSOCIATION HEADQUARTERS – THE BARRACKS, BERWICK UPON TWEED

Applicants are sought for the post of Association Executive Officer of The King’s Own Scottish Borderers Association, based at The Barracks, Berwick upon Tweed. This new post will be available in the late Spring of 2019, and the Trustees are seeking to attract applications from candidates with the experience and personal qualities to take the Association and its membership and, critically, its Regimental Museum and collection, to the next stage of its development. This sees the Association working in collaboration with other parties on the Barracks site, to develop a first-class visitor attraction and experience, alongside the other key responsibility of administering the Association for the benefit of the members.

The King’s Own Scottish Borderers Museum was founded in 1946, since when it has been the embodiment of the Regiment’s 317-year history. It has an unrivalled collection of militaria, medals, art and silver that charts the Regiment’s illustrious past, all housed in part of the first purpose-built barracks in the United Kingdom, designed by Sir John Vanbrugh and Nicholas Hawksmoor and built between 1718 and 1721. The Barracks are now under the stewardship of English Heritage. The Museum is accredited to Arts Council England, and has been recognised by the Scottish Government – through Museums Galleries Scotland – as having a ‘nationally significant’ collection.

The headquarters of The King’s Own Scottish Borderers Association is co-located with the Museum, and has the responsibility for ensuring the welfare of past serving member of the Regiment, for preserving the Regiment’s heritage, and – through events and parades – providing opportunities for its members and their families to continue the comradeship of their service.

Contributory pension scheme of 3% of salary

Expectation of occasional weekend and out of hours attendance; overtime will not apply, but Time off in Lieu (TOIL) by prior mutual agreement will be available to compensate for time worked in excess of the contracted 35 hours per week.

Applications to be submitted by no later than noon on Sunday 7 April 2019. Those selected will be asked to attend for interview in late April, at The Barracks, Berwick upon Tweed (precise date to be confirmed). Appointment is planned for mid to late May 2019.

Applications (consisting of a covering letter, CV and supporting statement, by email only) should be sent to the Chairman, Colonel Angus Loudon, at

If anyone wishes to have a confidential discussion about the appointment, they are asked to call the Chairman on the number above.