War broke out with France in 1754 when the British had attacked French positions in North America. At the same time Prussia had been fighting Austria for dominance of central Europe. In 1756, the great switched sides. Prussia allied herself to Britain while against France and Austria.

Meanwhile, on the continent, to counter the French threat, in late 1757 an allied army had been raised under Prince Ferdinand of Brunswick (the brother in law of Frederick the Great of Prussia). At first it contained no British units but this was soon to change.

The French marched against Ferdinand but were pushed back and the allies went on to recapture Hanover in February 1758 and a month later had cleared the country of the French. In August 1758 the first British units arrived to swell Ferdinand’s numbers with six regiments of horse and five battalions of foot, among them the 25th, along with the 12th, the 37th and the 51st.

In April 1759 Ferdinand attacked the French at Bergen but the engagement was inconclusive and in June of that year the French again moved on Hanover with 60,000 men under Marshal Louis George Contades and a further 20,000 under Marshal Victor-Francis, Duc de Broglie. Ferdinand had only 35,000 men at this time and subsequently fell back on the town of Minden, a major supply depot, fifty miles west of Hanover.

In early July however de Broglie beat him to it and took the town but Ferdinand rallied his forces and marched on Minden. Contades prepared to meet him and the scene was set for one of the most celebrated battles in British military history and a red-letter day in the regiment’s history.

Contades’ plan was for de Broglie to launch a feint attack on the right and expose Ferdinand’s left flank leaving it open to him. On August 1st, with this in mind, Contades drew up his forces, perhaps somewhat bizarrely, with his infantry on the flank and his horse in the centre.

Attacking at 4am, de Broglie was halted by Ferdinand, who in turn began by committing nine battalions on his right wing, three Hanoverian and six British, these being the 25th, and what would become the Suffolks, the Lancashire Fusiliers, the Royal Welch Fusiliers, the Hampshires and the Yorkshire Light Infantry.

The attacking allies suffered badly from French artillery fire and having been stopped by this, were then attacked by no less than eleven French cavalry squadrons. Prince Ferdinand rode up and down through the lines exhorting the soldiers to behave gallantly. Famously, the British and Hanoverian infantry held their fire until the French were within thirty feet and the result was carnage. The French cavalry retreated but came on again and were again beaten back by the infantry. It was at this crucial point that Ferdinand ordered the allied horse under the command of Lord Sackville to counterattack the French cavalry. But, to his lasting shame, Sackville did not carry out the order.

The British and Hanoverian infantry however, stood their ground and beat off a third French cavalry attack.

By 11am the battle was al but over as De Broglie was pushed back. The French had lost some 8,000 men, the allies only 2,600, most of whom came from the nine British and Hanoverian infantry battalions.

Losses to the 25th foot were relatively low, consisting of one officer killed: a Lieutenant Wilson, who was mortally wounded along, with one sergeant killed and 18 men. One captain, 3 lieutenants, 3 ensigns 4 sergeants and 115 men were wounded and nine listed as missing.

Specifically the wounded officers were according to regimental records: Captain Gore, Lieutenants A Campbell, Steroop and ensigns Pintard, Edgar and Lockhart. 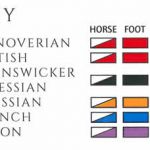 Minden was the turning point of the Seven Years War. It was the first great demonstration of the firepower of British infantry and it established a reputation for the ‘redcoat’ that would last through the next century and into the Great War.

It was also the battle in which the rules of war were at last rewritten, allowing the firer to aim his musket which was from henceforth no longer regarded as ‘unsporting’.

Minden was a resounding victory and its anniversary has been commemorated by the regiment down the centuries. In the words of Ferdinand himself ‘It was here that the British infantry gained immortal glory’.

Legend has it that either during their march to Minden or their advance on the field the English regiments picked roses and ut them in their hats.

This may have happened after the battle in Minden itself. Rose gardens were according to records on the east of Minden Heath.

Thus, according to regimental tradition, on 1st august every member wears a red rose in his head-dress. The tradition probably began in the 1880s but was officially authorised in 1935. Since WWII the day has commenced with the playing of the long reveille by the pipes and drums marching through barracks or camp. Following this red roses are presented to the regimental officers by the CO, or if present the Colonel in Chief of the regiment at a ceremonial parade.

Roses are then issued on parade to warrant officers, NCOs and men by their company officers. An account of the battle is then read out to the battalion by the adjutant and the regimental colour is trooped. After the parade a lunch is served and the rest of the day is a regimental holiday.

Earl of Leven
World War One