Due to annual leave, the KOSB Association office will be closed for the period Friday 19th April 2019 – Tuesday 30th April 2019 inclusive. All enquiries of an urgent nature should be directed via the KOSB Museum on:
Tel: 01289 307426
E-mail: museum@kosb.co.uk

It is with deep regret that we inform you of the death of William Blackburn Hartshorne who sadly died on Wednesday 3rd April 2019 at the Wansbeck Hospital, Northumberland aged 93.

William was mobilized on his 18th Birthday on 2nd February 1944 and originally served with the King’s Own Yorkshire Light Infantry before transferring to the 4thBattalion King’s Own Scottish Borderers as a Bren gunner. Before demobilization as a Sergeant, William was seconded to the Durham Light Infantry after the cessation of World War 2.

FROM THE COMMONWEALTH WAR GRAVES COMMISSION

To Whom it May Concern,

I hope you don’t mind me getting in contact – my name is Kirsty and I work for the Commonwealth War Graves Commission, the organisation which cares for the graves of 1.7 million service men and women of the First and Second World Wars. I am getting in contact regarding an exciting project we are currently working on this year.

As you are probably aware, 2019 marks 75 years since some of the most defining moments of the Second World War. Today the CWGC’s iconic cemeteries and memorials remain places of pilgrimage for veterans and descendants, tended by our gardeners and treasured by local communities. We want to capture people’s memories of these unique and poignant sites, showcasing their important role at the heart of remembrance as we know it today.

We have been capturing these reflections in our unique online archive, Voices of Liberation: https://liberation.cwgc.org/voices-of-liberation. We have been speaking with veterans, battlefield guides, military experts, family pilgrims and CWGC ambassadors alike to record their connections to the Second World War, as well as their thoughts on our sites as symbols of remembrance.

I am writing to you in the hope that you might be interested in the project, and willing to circulate it to your members via your website/social media or newsletter. It would be wonderful to reach out to the members of the King’s Own Scottish Borderers, and to speak with any that would be willing share their connection to the Second World War with CWGC. I’m sure you have many members with incredible stories to share, and it would be wonderful to have these preserved within our archive for posterity.

If you would be interested in sharing CWGC’s latest campaign I would be delighted to give you some more details about the project. CWGC is of course more than happy to return to favour to your organisation however best they can. 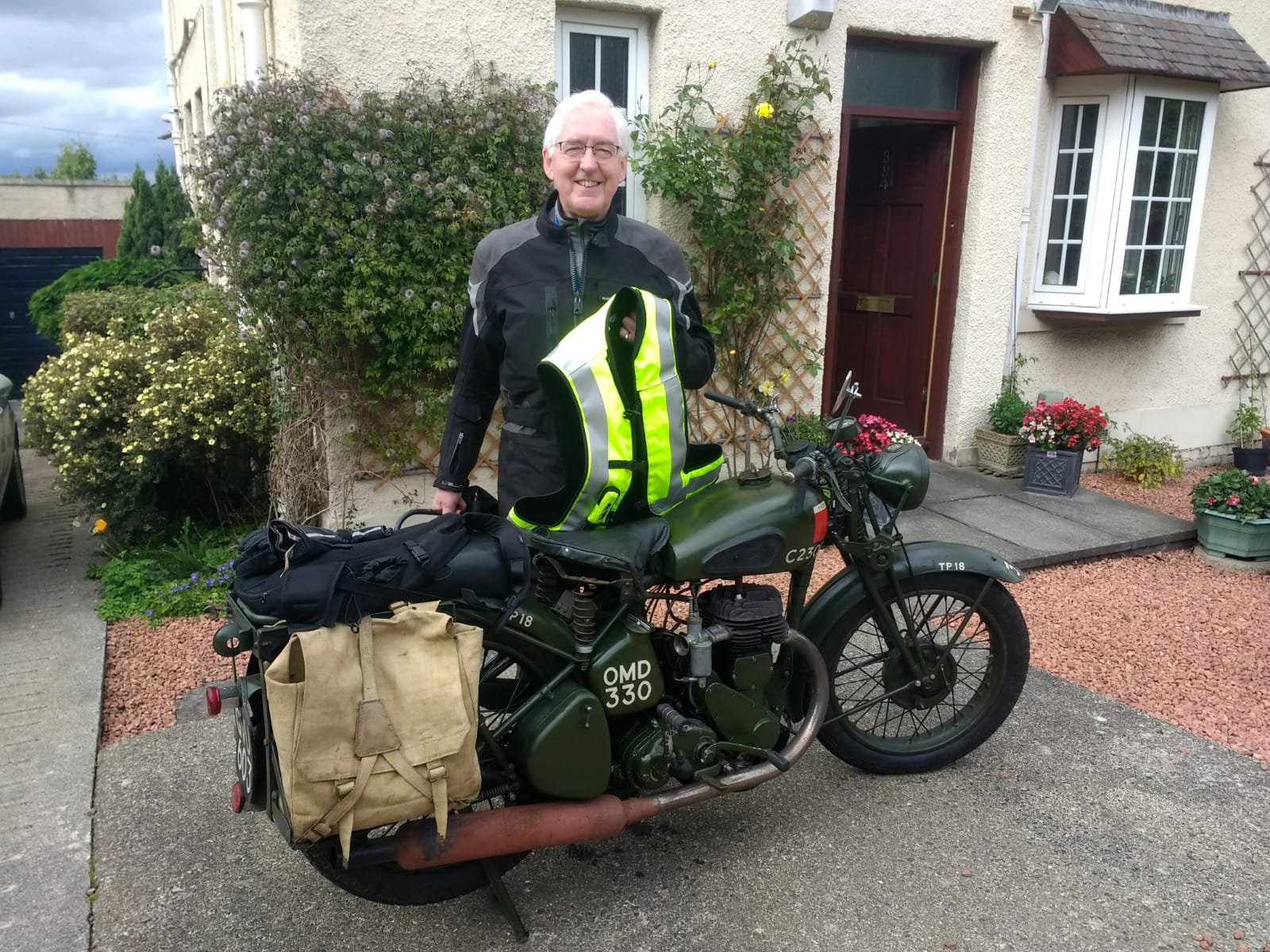 NOW FOR A LIGHTER NOTIFICATION

Fine Borderer Richard (Dick) Taylor has received a new hip, new toy which he intends riding to Arnhem and a new phone. Details of the new toy, courtesy of Dick are:

“In fact the bike is a bit new for Arnhem.  It was built on a WD contract Sep 45-Mar 46, so it’s my twin, or near enough, and in any case they probably didn’t have DR bikes in 7 KOSB, just airportable bicycles at best, but at least it looks the part.  The 1 KOSB tank badge was Euan’s addition, and the other markings are older.  Not sure why it has 31 on the front mudguard but Euan and I both commanded 7 Pl, which is a nice coincidence.  It may all turn out to be too difficult to involve the bike but I’d like to try.”

Regarding his new phone, Dick is very keen to have “Blue Bonnets” installed as his ring tone. Any techie assistance will be appreciated.