From our Association President at Berwick on Saturday’s Parade:

“Good morning everyone, and welcome to Minden Day 2018 in the Barracks.

As President of the Association and Chairman of the Trustees, I would like to thank you all for gracing us with your presence today.

I extend a special welcome to our principal guests:

Myra Grant, great niece of Sergeant Major John Skinner VC DCM. I am delighted that she and her husband George, are with us here today and that she has kindly agreed to present the roses.

I also welcome the Mayor of Berwick upon Tweed, Councillor Brian Douglas and his wife Mrs Grace Douglas.

The Pipes and Drums of Berwick and Eyemouth Royal British Legion, under Pipe Major Laura Robson and Drum Major Colin Spence, who once again support us and for which we are very grateful.

I also extend an especially warm welcome to Drum Major Bob Bolton and Bandmasters Peter Butler and David Wall, and all the former members of the Regimental Band who have re-formed today to play for us. All of us on parade will have fond (well, mostly fond) memories of muster parades, church musters and RSMs Friday drill parades accompanied by the band. 25 years since their disbandment, it is a real pleasure to see them here again today, though thankfully perhaps not in their Leslie Tartan Lederhosen!!

I would also wish to thank all those involved with preparing and setting up today’s event, including:

It is 259 years since those momentous events of 1759, when the British Army earned immortal glory on the field of Minden, the story of which Andrew Herberts, Chair of the Museum Committee, related to us a few minutes ago. Thank you once again, Andrew, for reminding us of the story of that crucial battle.

It is only fitting that, every year on this date, we gather here at the home of the Regiment to commemorate and celebrate that famous victory, and pay our tribute to our forebears who fought with the red rose in their headdress. The wearing of the rose today is more than just a gesture; it is a tangible link with the 318 years of the Regiment’s active existence. It is a history of which we can all be very proud and its legacy is carried forward today by all ranks of 1SCOTS.

The golden thread, between the 1st battalion and ourselves is particularly important, and I am delighted that the current commanding officer of 1SCOTS, Lt Col Andy Watson, is himself originally a Borderer, as is his RSM, WO1 Docherty, and they are fully committed to sustaining and strengthening those links. I once again thank him and RHQ RIrish for agreeing that our Northern Ireland Branch can continue to meet in Palace Barracks. Incidentally, the move of 1SCOTS to Aldershot, has been yet again delayed, and so they are unlikely to move before 2020.

But how are we doing in the association? Last year I mentioned our new website and the regimental history. The first continues to grow, and i wish to once again thank Peter Hogg for his unstinting efforts to improve and widen its content and reach; we can all do more, however, to make it the principal mouthpiece for the association, so please ensure that you do send in any news, and to sign up for the members area to keep yourself informed of events.

Our history – ‘Always a Borderer’- is still very much alive, and there are launches planned for this autumn in Edinburgh and London, with others pending in Edinburgh and elsewhere, while we will feature in this year’s Edinburgh book festival on 16 august, all hosted by the author, Iain Gale. Copies are of course on sale today.

Our AGM last year did not, as usual, take place on ‘Minden Morning’, but instead took place in Edinburgh. This was well received, and this year’s will again be in Edinburgh, on Saturday 6 October. More details to follow, and I look forward to a good turnout.

We also continue to commemorate the battles of World War 1 during its centenary. 2015 saw trips to Gallipoli and Loos, 2016 to the Somme, and last year it was Passchendaele – or third battle of Ypres – where we unveiled a commemorative regimental plaque at Zonnebeke, a few miles east of Ypres in Belgium, to record in perpetuity all 7,500 Borderers who fell in WW1, thereby filling a serious gap in our memorials. This memorial plaque was only possible through the generosity of many of you here last year, and I thank you for that.

The final WW100 trip is in September, returning to Flanders to walk the ground of the last few months of the war and to see where Sgt Louis McGuffie won his VC – our fourth and last of the first world war. I once again applaud everyone who has worked so hard to make these commemorations so moving, and the tours to our most poignant battlefields that Andy Middlemiss and John Ross have arranged have been quite outstanding. 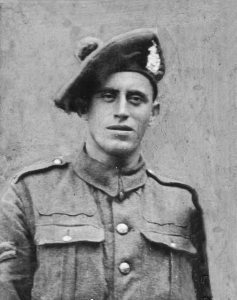 I have just mentioned Louis McGuffie. Can I draw attention to 28 September this year, which marks the centenary of the action that resulted in his award of the VC, and which will be marked by the unveiling and dedication of a VC commemoration paving slab to him in his birthplace of Wigtown. This is a major event being sponsored by Dumfries and Galloway council and will include the inauguration of the Louis McGuffie memorial garden in Wigtown.

Allan Alstead continues to work hard on what will become the Regimental Memorial on the North Bridge in Edinburgh.

Lastly, our presence at the Cenotaph annually in November goes from strength to strength, and I once again applaud John Pullman and his committee for all they do to make this national event such a key date in our calendar. We have 75 places this year for the final parade associated with the centenary of WW1, and I know we will fill them all, but for those who cannot travel to London, let’s also turn out in greater numbers in Edinburgh and at local memorials to honour our fallen.

Our Royal Patron, Her Royal Highness The Princess Royal, continues to take a close interest in our affairs, and I am delighted that Her Royal Highness has once again very generously sent us her Minden Day Greetings, and she has asked me to pass them on to you all:

Finally, the year since last Minden Day has, sadly, seen the departure of many Borderers from a range of campaigns. I do not have time for a complete roll call of them all, but highlight a few in particular who come to mind:

Sergeant Bill Speakman VC, who died aged 90 on 20 June. Over 70 members of the association gathered at the Royal Hospital Chelsea on 19 July to bid farewell to a gallant Borderer who had become, quite simply, a legend. In a moving ceremony in a packed chapel, where he was borne by a party of fellow SNCOs  from 1SCOTS, with Major General Tim Toyne Sewell representing TRH The Prince of Wales and Duchess of Cornwall, with the ‘Last Post’ played by WO2 Ron Creasey and ‘Blue Bonnets’ by PM Willie Cochrane – both of whom are here today – ‘Big Bill’ Speakman VC was carried to his rest at the end of a remarkable and colourful life which touched us all to a greater or lesser degree. We will miss him very much indeed.

I am delighted to announce that Bill very generously bequeathed his set of replica medals and his Korean order of military merit (1st class) to the museum, and we hope to have these on display soon. They will join those of John Pender MM in the Korean medals case, whose medals were so generously donated by the family  – in a display dedicated to the Korean War.

I know that many of you present went to their funerals to mark their service and give them a good Regimental send-off – and who can forget the rousing and spontaneous rendition of ‘hey wee man’ at that for John Pender. We recall them, and all the others who we have lost, with pride.

So, that is enough from me. Let’s once again have a great day in each other’s company, share memories, take pride in remembering why we are here, and remind ourselves once again that