MINDEN DAY GREETINGS FROM HER ROYAL HIGHNESS THE PRINCESS ROYAL 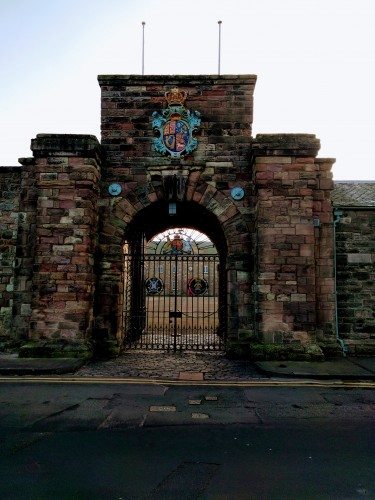 FROM OUR ASSOCIATION PRESIDENT ON SATURDAY’S PARADE AT BERWICK

“Good morning everyone, and welcome to Minden Day 2019 in the Barracks.
As President of the Association and Chairman of the Trustees, I would like to once again thank you all for gracing us with your presence today.
I extend a special welcome to our principal guests:
Ian Waddell, Her Majesty’s Deputy Lieutenant for Berwickshire, accompanied by his wife, Fay. Ian has very kindly presented the roses.
I also welcome the mayor of Berwick Upon Tweed, Councillor Anne Forbes, and her consort, Tony Forbes, the Sheriff, Martin Warner and the Sheriff’s Lady, Carol Warner, and the Sergeant at Mace, Joyce Benton.
I would also like to welcome:
the Pipes and Drums of Berwick and Eyemouth Royal British Legion, under Pipe Major Laura Robson and Drum Major Colin Spence, who once again support us and for which we are very grateful.
I also extend a warm welcome to Drum Major Bob Bolton, and all the former members of the Regimental Band who have entertained us today along with Nancy’s Dancers.
And, I extend a particuarly warm welcome to Allan Brydon, a local musician from Hawick but with an international reputation. Allan sang along with Isla St Clair at the unveiling ceremony of our regimental plaque on the WW1 monument at Zonnebeek, Ypres, in September 2017, and today gave us a rendering of his wonderful new regimental song ‘The Road to Passchaendale’– many thanks Allan – it is beautifully evocative, and no doubt we’ll have Kit Locke singing it in the pub tonight………
I would also wish to thank all those involved with preparing and setting up today’s event, including:

and everyone else who, as always, I cannot thank individually by name, who have given freely of their time and energy to make today possible – it is much appreciated by us all.
It is 260 years since those momentous events of 1759, when the British Army earned immortal glory on the field of Minden, the account of which Andrew Watson – who was commissioned into the Regiment and who is currently the Commanding Officer of 1SCOTS – related to us a few minutes ago. thank you, Andrew, for taking time out of your busy operational schedule to come over from Palace Barracks in Belfast with the RSM, Mr Docherty – himself also a Borderer – to remind us of the story of that crucial battle.
Our royal patron, Her Royal Highness The Princess Royal, continues to take a close interest in our affairs, and I am delighted that Her Royal Highness has once again very generously sent us her Minden day greetings, and she has asked me to pass them on to you all.
It is very important that we continue to gather here at the home of the Regiment every anniversary of this pivotal battle to commemorate and celebrate that famous victory, and pay our tribute to our forebears who fought with the red rose in their headdress. the wearing the rose today is more than just an historical gesture; it is a very tangible link with the 317 years of the regiment’s active existence from 1689 to 2006. it is a history of which we can all be very proud and its legacy is carried forward today by all ranks of 1SCOTS. I am delighted that the CO and RSM can be with us today – the golden thread, between the 1st battalion and ourselves, is particularly important, and the CO and RSM are fully committed to sustaining and strengthening those links. I once again thank him and RHQ R IRISH for agreeing that our NI branch can continue to meet in Palace Barracks.
But how are we doing in the association? in terms of communicating, the website continues to grow, and I wish to once again note the unstinting efforts of Peter Hogg to improve and widen its content and reach, while living in cyprus – he’s here in  person today, and I thank him publicly for all he does ; we can all do more, however, to make it the principal mouthpiece for the association, so please ensure that you do send in any news, and to sign up for the members area to keep yourself informed of events.
Our AGM last year took place in Edinburgh. moving it from ‘Minden Morning’ to a separate date has been well received, and this year’s AGM will be held in Locharbriggs, Dumfries, on Saturday 12 October. more details to follow, and I look forward to a good turnout in the west – my thanks to Major Willie Turner for making this possible.
We also continue to commemorate the wars and conflicts of the past. the twelve months since the last Minden Day has seen three major events – first was the final WW100 trip in September 2018, returning to Flanders to walk the ground of the last few months of the war and to see where Sgt Louis McGuffie won his VC – our fourth and last of the First World War. Sgt McGuffie’s VC was marked by the very moving unveiling of a commemorative paving slab, and the opening of the Louis McGuffie Memorial Garden, in Wigtown on 28 September 2018, attended by many Borderers.
Secondly, we have recently marked the 75th anniversary of D Day. Although they dwindle in number, we still have a few Borderers who fought in Normandy in 1944, and one – James Roberston, from Lockerbie and now aged 97 will, we hope, be presented with his Legion D’Honneur later this year.
September will witness the 75th anniversary of Operation Market Garden in Arnhem, where our 7th Battalion fought so gallantly. A most successful battlefield tour, ably led by Peter McCutcheon and well attended by many Borderers and friends, has recently returned from Arnhem. I was hoping that Geoff Roberts, one of our 7th Bn veterans, would be with us today, but he can’t make it; I do hope he can represent us at the Arnhem 75th commemoration event in the Netherlands later in the year, as he has for many years.
Finally, in terms of anniversaries there is one more to note, that being the 30th anniversary of Derryard coming up in December, where in one of the most audacious IRA attacks in the whole NI campaign we lost two KIA (LCpl Michael Paterson and Pte James Houston) and earned two DCMs (Cpls Duncan and Harvey). this event is close to home for many on parade today, which makes being together all the more relevant.
Our presence at the Cenotaph annually in November goes from strength to strength, and I wish to take this opportunity, as he stands down from chairing the organising committee for over ten years, to thank John Pullman for all he has done to make this such a special event, and increase our participation from a handful to over 70. well done John! Please support his successor, Peter Hogg, to sustain this magnificent turnout, while also turning out in greater numbers in Edinburgh and at local memorials to honour our fallen.

Finally, the year since last Minden day has, sadly, seen the departure of many Borderers from a range of campaigns. I will not read out a list, but note in particular the passing of:
Graham Allt
George Barton (7th Bn, Arnhem)
Hubert Legget (1st Bn, Normandy)
George Ross
Can I also seize this opportunity to note the retirement from the board of trustees, after many years, of Brigadier Allan Alstead. Allan has been intimately involved with the regiment and its affairs for over 60 years since being commissioned in the mid 1950s, and has shown incredible dedication throughout that period; we have all benefited greatly from his unstinting commitment, wisdom, loyalty and experience, and he embodies all that we admire and respect in a Borderer. I’m glad to say that he remains on board to help run the Malaya Dinner, and work to complete the renovation of the North Bridge Memorial in Edinburgh
Looking to the future, many of you will have received some recent communication about association membership. I don’t want to labour the point today from the podium, but I do wish to emphasise the need to both increase our association membership and our income, in order to sustain what we do for our members and our heritage into the future. I urge anyone who has not signed up to do so today, and help support our important benevolent work.
So, that is enough from me. let’s once again have a great day in each other’s company, share memories, swing that lamp as we sit on that sandbag, take pride in remembering why we are here, and remind ourselves once again that.