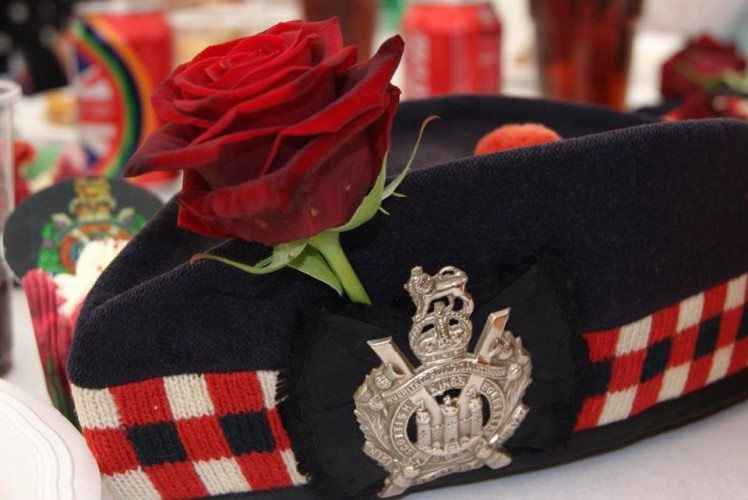 Prior to the Parade March On and during the Parade the Pipes and Drums of the Royal British Legion, Eyemouth and Berwick Branches and the Regimental Band of The King’s Own Scottish Borderers (Reformed for Minden) will play. The Pipes and Drums under the direction of Pipe Major Laura Robertson and Drum Major Colin Spence and the Regimental Band, Drum Major Bob Bolton with Bandmasters Peter Butler and David Wall.

Borderers and Friends playing in the Regimental Band (Reformed)

MUSIC PROGRAMME (Prior to the March On)

Massed bands march on ‘Within a Mile o’ Edinburgh Toon/Battle of Killiekrankie’
Pipe band ‘Battle of the SOMME and Heights of Dargai’
Regimental Band ‘Sons of the Brave’
Combined  ‘CSM John Skinner VC. This was a specially commissioned piece played last year at the laying of a paving stone in his name.
Regimental Band ‘Royal Stuart’
Combined  ‘Highland Cathedral’ then March off -‘ Scotland the brave/we’re no awa tae bide awa’

March on to ‘Blue Bonnets O’er The Border’
‘CSM John Skinner’ to be played by a lone piper when the presentation of the roses begins.

The Regimental Band will then play for the remainder of the Parade
‘Minden Rose’
‘Officer of the day’
‘A Border Rose’, composed by the late Danny Greer KOSB.
‘Old Comrades’
‘Hey Wee Maun’ arranged by  Mark Smith KOSB
‘We Were There’ composed by Chris Edwards KOSB