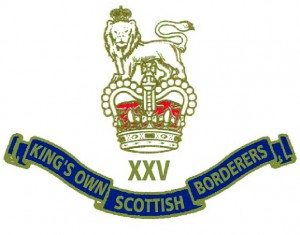 A party of “Old and Bold” from the King’s Own Scottish Borderers (KOSB) conducted a pilgrimage this summer in late August, to commemorate one of the most tragic battles of the war.

A group of KOSB veterans, with some families and friends, visited the Passchendaele area in Belgium, outside of Ypres, 17 -20 August, to mark the 100th anniversary of the battle. The group spent 3 days at the battlefields, seeing just where the soldiers of the KOSB laid down their lives, and visiting their graves and memorials.

Included in the party was the great grand daughter of Cpl Richard Howard, killed at the attack on Faffemont Farm, by 2 KOSB on 3 Sep 1916. Liz Howard-Thornton said –

“What those young men did for us, and the freedom we have today because of it, must never be forgotten”

Lt Col Andy Middlemiss- one of the trip’s organisers- said he believed it served a valuable purpose:

“Everyone associates Passchendaele with mud, misery and high casualties,” he said “We stood on the actual spot, where our forebears fell in such terrible numbers, and we commemorated their memory on this trip.”

Andy’s wife, and mother of a serving soldier, Jo, who also went on the trip said:

“It would have been horrendous for those on the homefront too. I can really identify with that .The worst bit was probably the not knowing, and the length of time it took to get any hard information and news.” 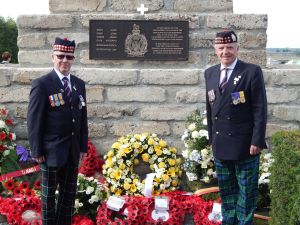 “Passchendaele, or 3rd Ypres as it’s also known, is one of our main battle honours, where we lost so many young Jocks, and where we won 2 VCs in one day- CSM Skinner and CQMS Grimbaldeston. So for us to walk precisely in the footsteps, on the ground, of the 1917 Jocks, and see where those gallant deeds were done, was incredibly special. We must learn from what happened, we want to honour our forebears, and most importantly, we must talk about it in the future. As Norman Drummond , Chair of the WW100 Panel , Scotland says – What do we learn from all this ?”

After 3 and a half months hard fighting, with appalling casualties, both from disease and combat, the battle ceased , mainly due to the dreadful winter in Flanders that year .

Hundreds of thousands on both sides paid the ultimate price with their lives. The KOSB party unveiled a specially commissioned memorial bronze plaque, in a large Belgian led ceremony at the Frezenberg Redoubt , near Zonnebeke, on Saturday 19 August, to all 7050 Borderers, who died in WW1 . The 7th / 8th Battalion of the KOSB had stormed and taken that very spot on 31 July 1917 with over 300 casualties. Private fund raising allowed that to be implemented in a very short time.

For Ian Domingo of Dumfries, whose grandfather fell at Gallipoli, this pilgrimage was a powerful tribute to those who fell:

“It is important to remember that these men of the KOSB, and thousands of others on both sides, showed incredibly bravery in terrible conditions.” he said “So, the conclusion of our trip was a very moving ceremony at the huge Tyne Cot Memorial, opposite the KOSB name panels, with piping and prayers from Padre Rory MacLeod, and lovely readings.” 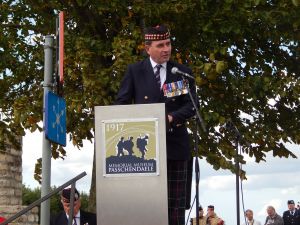 John Ross, one of 5 brothers who served in the KOSB, and one of the co-organisers said:

“It was really moving to be there, to remember, and to see what was lost in human sacrifice. This is the 3rd trip we have run on KOSB WW1 battles, and for all of us “Old and Bold” this was another very special and moving trip. NEMO ME IMPUNE LACESSIT.” 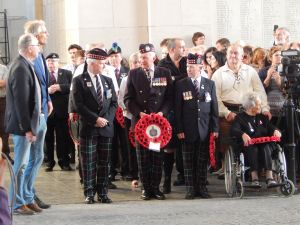