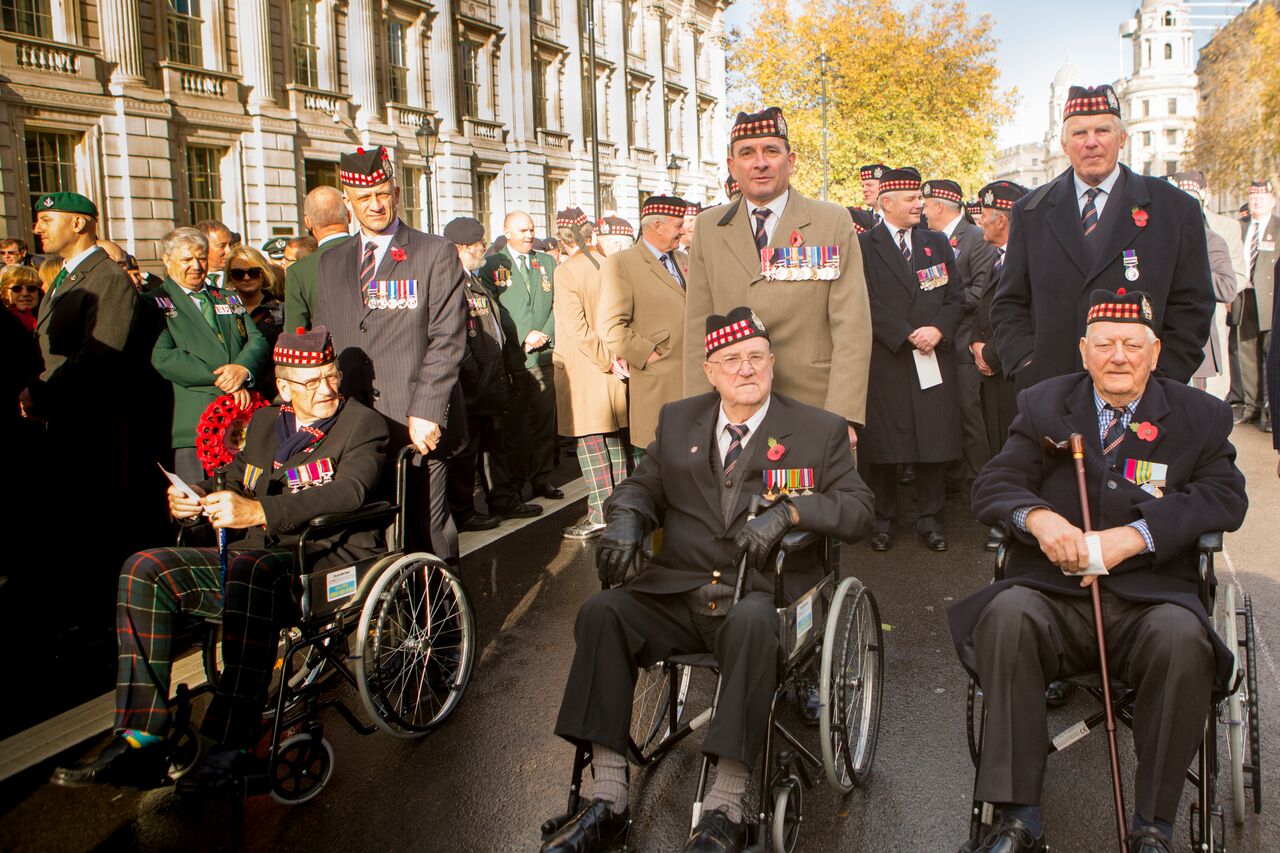 2018 has marked the conclusion of the centenary of the end of the First World War, and this has been a key focus for the Association throughout the year, along with the more routine events which we organise and activities that we carry out, all on behalf of the Association, its members, and the wider Regimental family.

World War One commemorations saw three particular events. Andy Middlemiss organised and ran the fourth – and last – of his outstanding WW1 battlefield tours, this time to the Ypres area to study the ‘Last 100 Days’ of the war. In late September a large number of Association members gathered in Wigtown to be present at the unveiling of the VC Memorial Paving Stone to Sgt Louis McGuffie VC, exactly a century to the day since he won his award for gallantry. And then we had a turnout of some 70 Borderers at The Cenotaph in London on Sunday 11 November, precisely one hundred years to the minute after the Armistice of 1918, and again expertly managed by John Pullman, while Borderers gathered at other local memorials around the country and the pipes were played by Hawick musician Allan Brydon at the Regiment’s WW1 memorial at Zonnebeek in Belgium. I am grateful to everyone who in any way was responsible for arranging, or who attended, these important occasions, which were so important.

We once again held an outstanding Minden Day, with approaching 300 on parade under command of Ken Fraser. We were delighted that Myra Grant, great-niece of CSM John Skinner VC, was able to attend to present the roses. The 1st Battalion’s Military Band re-formed for the day, under Peter Butler, and played as stirringly as ever – it was great to see them on parade once again, while the RBL Berwick Pipes and Drums also played for us.

Our Malayan veterans held a very successful dinner in Peebles in September, and we hope that this gathering will continue in the future; the annual Cruickshank Dinner in November was also well attended, although there is always room for more.

We also, inevitably, saw the sad departure of a number of Borderers during the year. Perhaps most notable was the death of Sergeant Bill Speakman VC in June, and dozens of Borderers gathered in the Chapel of The Royal Hospital, Chelsea, for his funeral. Bill was borne into and out of the chapel by a Bearer Party formed of Warrant Officers and SNCOs from 1SCOTS, while Ron Creasey played the Last Post and Willie Cochrane ‘Blue Bonnets’ – all very moving, a great example of the ‘Golden Thread’ that exists between ourselves and the Royal Scots Borderers, and a tremendous send-off for a remarkable man. We also remember all of those who served with such distinction and supported the Association loyally who have died during the year, with pride and affection.

Looking forward to 2019, work continues with our partners in The Barracks to find the best way of taking forward our museum and its unrivalled collection; I am very aware that progress has been slower than anticipated, but I will update you all once we have more certainty on the plan and timescale. We are also keeping a very close eye on the Association’s financial situation, and a decision was approved at the Association AGM in late September to set the membership subscription at a more realistic figure that reflects our running costs and helps ensure that we can continue to support all that we do for as long as possible. The detail will be followed up early in the new year; I seek your collective support for this change, and if you are not already a member of the Association, please join. 2019 will also see the 75th anniversary of D Day and the Battle of Arnhem, and these will be our historical focus, along with the Association’s other annual events, with Minden Day being on Saturday 27 July 2019;

The Trustees and myself are extremely grateful to all of our staff plus the volunteers – be they at Berwick, in the Branches, in Cyprus from where Peter Hogg runs the Association Mailing List and Website, or elsewhere – who make it all possible. However, we have an ongoing requirement for volunteers, particularly at The Barracks to help maintain the collection and staff the Museum at the weekends, but also on every Branch committee, in order to keep things running as well as we would both like and expect. So, if you have time to help out, please let us know.

It bears repeating that, regardless of whatever else we may do as an Association, our main purpose is our charitable focus, looking after fellow Borderers, and relieving hardship where it may arise. This year, we dealt with 68 cases of need, and disbursed in the region of £16,000 from Regimental funds, noting that this figure represents only a proportion of the sums awarded in each case, as additional funds were added from other sources such as Poppyscotland, and ABF The Soldiers’ Charity. If anyone knows of a Borderer in distress who needs help, please let us know.

I thank you all for your support throughout 2018, and I wish you and your families all the very best for the Festive Season and the coming year. I urge you to keep an eye on the excellent Regimental Mailing List and Website for news, while I do not need to remind you that: