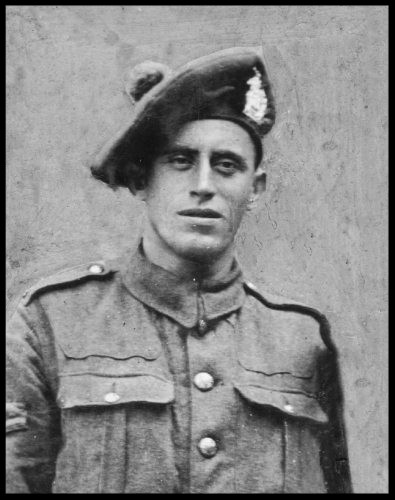 The Sergeant Louis McGuffie VC commemorative stone will be unveiled in Wigtown on the 28th September 2018 exactly 100 years after the action in which he received the Victoria Cross.

He was 25 years old, and an Acting Sergeant in the 1/5th Battalion, The King’s Own Scottish Borderers when the following deed took place for which he was awarded the Victoria Cross.

On 28 September 1918 near Wytschaete, Belgium, during an advance Sergeant McGuffie entered several enemy dug-outs and, single-handed, took many prisoners. During subsequent operations he dealt similarly with dug-out after dug-out, forcing one officer and 25 other ranks to surrender. During the consolidation of the first objective, he pursued and captured many prisoners and was also instrumental in rescuing comrades who were being led off as prisoners. Later in the day, while commanding a platoon, he took many more prisoners.

He was killed in action at Wytschaete, Belgium on 4 October 1918.

The unveiling will take the form of a parade in the town gardens, to be named ‘Louis McGuffie VC Memorial Gardens’, with participation from:

ATTENDANCE AT THE PARADE

KOSB Association attendance is being coordinated by HHQ.

This is our final VC recipient to be commemorated for his actions in World War 1 and it is requested that as many Borderers as possible attend this very important Regimental event.  KOSB Association Branch Standards are most welcome.  Dress for the parade is Glengarry, Regimental tie, blazer/suit, trews (if you have them) and medals (optional).
Those wishing to attend the parade on 28th September are requested to notify the Association Secretary  no later than Friday 21st September , This will greatly assist the Parade Marshall and Wigtown Council.

The  Association Secretary can be contacted on: