“BLOG 2” from the Battlefield Tour of The SOMME 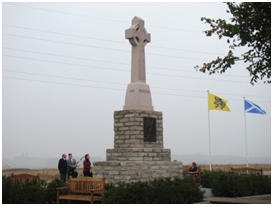 THREE GENERATIONS WILL COMMEMORATE  BORDERERS’ SACRIFICE AT THE SOMME

A three generation party from past, present and possibly future soldiers from the King’s Own Scottish Borderers are now conducting a battlefield tour indeed a pilgrimage, to commemorate one of the most tragic battles of the war.

KOSB veterans, current members of 1 SCOTS and school pupils and staff from Queen Victoria School Dunblane, are visiting The Somme battlefields in France from 31 Aug – 5 September, to mark the 100th anniversary of the battle. The 39 strong group will spend five days at the battlefields, seeing just where the soldiers of the KOSB laid down their lives, and visiting their graves and memorials.

“Left Edinburgh at 11.00am on the 31st August to go by ferry to Belgium. Only just made the ferry after much panic on the bus by the organisers. After a great job done by P&O the ferry trip was great and had a good night on the boat. Arrived in Belgium at 9.00pm on the 1st Sep and travelled by bus to Serre 1 cemetery for our first fix from Keith Dolan our excellent tour guide. Although we were held up at the Belgium/France border we made good time.

The first day commentary of the first day attack on the Somme by Keith was spine chilling and fully interactive – it  explained the 12th York and Lancs part played in the initial attack (photo 2 in trenches)We moved on to have lunch at Ocean Villas (English version) where we had lunch and a demonstration of what a soldier looked like in the time of the great war.

Our final visit to the Lochnagar Crater proved to be a worth while visit as we seen the damage to done by this huge mine. We also seen the brass plaques set out on the steps by Liz Howard for her family (one of which was KOSB Cpl Howard). It also proved to be a key point when Keith explained the story of George Nugent of the Tyneside Scottish who’s body was discovered in 1998 and was re-buried in 2000 with full military honours
The day was finished by having supper at 19.30 with a birthday celebration and 3 presentation – each by George Sutherland on artillery, Keith Dolan doing medical services and Padre Stephen Blakey doing stuff on the job of the Padre.”
John Ross

“It’s D minus one now….the party meet in Edinburgh tomorrow,take a bus to Hull via Berwick to pick up the Association Secretary,Peter Walton,and Padre Stephen Blakey, then the night crossing to Europe. We are all excited, John Ross has played his usual blinder on the admin, and we owe a debt of thanks too to Euan Scroggie,who has masterminded the finances.

We will be 39 in total,6 from QVS Dunblane, 6 from 1SCOTS and remainder old and bold ,including a Black Watch gentleman, Torquil MacLeod, a retired policeman,and folks from Scone.

On arrival,we will meet Ian Gibbs and others from the South,including ,critically,our guide ,the fabulous Keith Dolan,who gave the Association such a moving trip to Gallipoli last year.

More later,but it promises to be another memorable journey to honour the over 3,500 Borderers who lost their lives at the terrible battle of the Somme.  1 July to 15 Nov 1916.”