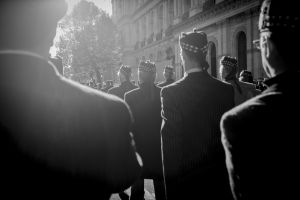 Awaiting the “step off” on Whitehall.

REMEMBRANCE SUNDAY AT THE CENOTAPH 2015

The morning quietude of St James’s Park on Remembrance Sunday 2015 was the backdrop to a trickle of Service veterans, gradually increasing in number and heading purposefully towards Horse Guards for the Remembrance Sunday ceremony at the Cenotaph. The casual viewer could not fail to notice the broad range of attendees, many representing long departed organisations, military and civilian – a testament to the significance for everyone. Overall attendance for the ceremony has increased each year and it is pleasing to report that the KOSB presence has continued to reflect  this. We formed up under direction of Peter Hogg to await the move through the Horse Guards Central Archway. Our column (Column A) was the last to leave Horse Guards parade ground and we watched the sight of the numerous contingents gradually vanish through the Archway tunnel in a manner suggestive perhaps of earlier wartime generations. Finally came our turn and we marched into a hushed Whitehall to join with the many other Service detachments, organisations and spectators, all gathered for a single purpose.

The Two Minutes Silence held us, each alone with personal thoughts in the stillness that descended and enveloped Whitehall. The Silence, followed in turn by the laying of wreaths at the Cenotaph and then the traditional service – its poignant resonance familiar and lasting.

The March Past was very much a statement of who we are. Led by Brigadier Colin Mattingley, the Borderers contingent complete with a distinguished leading file made an impressive sight with our bearing and panache – the smart “Eyes left!” at the Cenotaph drawing favourable comment from the Guards Sergeant Major. Our sense of pride was there for all to see as we wheeled onto Great George Street and then along Horse Guards Road with the odd word from Peter Hogg keeping us sharp. The salute was taken by HRH The Duke of Cambridge and we marched past in style before turning onto Horse Guards once more, enjoying the last few hundred metres with true KOSB sparkle – to the applause of the other assembled contingents.

The Barley Mow lunch gathering on Remembrance Sunday has become a popular, informal feature and this year’s attendance made it especially so. Borderers, family members and friends were welcomed warmly,  Angus Loudon, the Association President updated the company on current issues and developments. Jim Scott’s behind the scenes efforts as Messing Member were rewarded by the excellent buffet. Thanks also go to Brian Higgins for his continued camera work in support of Remembrance Sunday. We are grateful to Ian Gibbs, Chairman of the London & Southern Counties Branch for his effortless style in organising the cross-planting service at the Field of Remembrance on the Saturday morning, followed immediately by the Branch Lunch at the Victory Services Club . It was a very full Remembrance Weekend and a big ‘thank you’ to everyone who attended and gave support.

Remembrance Sunday at the Cenotaph in the company of Borderers is a truly memorable experience. Hopefully you will join us at Horse Guards in 2016.