Welcome to the King’s Own Scottish Borderers

Our museum contains archives of the regiment from over the years. We can provide research at a cost related to the amount of time spent.

Research into the regimental archive via our museum experts. 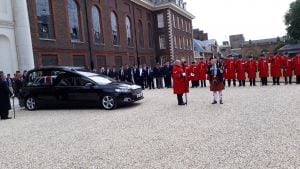 Find out more about up and coming Association current events, past events and news.

A photographic record from 1689 until yesterday.

The Regiment was created in 1689 as a crisis measure for the defence of Edinburgh against the Jacobites. The Regiment was recruited “by beat of drum” along the Royal Mile (the High Street in the Old Town) of the City of Edinburgh in the record time of two hours with men flocking to join the Earl of Leven to safeguard their city. In 2006 under changes delivered by the Future Infantry Structure the Regiment became part of the Royal Regiment of Scotland.

We welcome you most warmly to the site and hope you will learn more about us and our proud soldiers who have served their Regiment and their country for over 317 years.